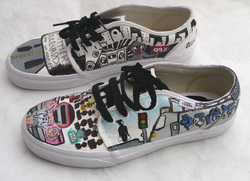 LOCAL FLAVOR - Brandon & Eric, 11th grade
Our shoe theme is local flavor. It portrays the different points of view in our city, East Los Angeles. We include the heart of our city- Whittier Boulevard. On one shoe we painted what everybody sees out in the streets which is, graffiti, music, and most recently the Occupy L.A movement. On the other shoe we wanted to show the sort of underground scene that we have here. Many of the teenagers here are involved in hosting parties and big events. Recently they have built a train running through Los Angeles. We used this as a design in our shoe. Since both of us are into graffiti, we decided to show a type of graffiti that is not practiced as much now. The idea of this is to have a piece on the train, that way wherever the train goes, your tag goes with it. This is also a way used to express ones self. To us, one of the biggest trends followed by both young and old, is graffiti.
To make this possible we began with covering the shoe in a white acrylic paint. We then began to actually draw out our design on paper, and then we sketched it out directly onto the shoe. Once we had the design sketched out, painting was next. To us, this was the hardest part. One mistake and we could ruin the entire shoe. Thanks to The Garage- a graffiti store in East LA and some former students of my teacher – owners of Daily Fresh clothing - we were able to get much needed advice and supplies. Everything else, was up to us and our wild imagination. The characters are all our own designs. Everything on the shoes is there because we feel that it is important to our city and our point of view.
Thanks to this contest we were able to express ourselves in a fun way. We both plan on designing our own wearable shoes in the future. 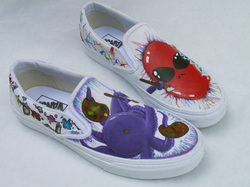 ART - Dave & Edessa, 12th grade
When we first started working on the shoes, we thought we're going to need like more arms to get this done. That’s when we thought of an octopus painting because that’s a little how we felt. The alien was something we thought maybe no one else would paint. The shoes took about a day's worth of hours to complete. We made the sketch, outlined, primed, colored, and refined our ideas as we went.
We tried to make the right side of the face look as if it was dripping like wet paint, but it looked as if the matter particles were just moving away from the head.  Some of the tricks we used were the masking tape around the bottom rims to make sure we didn’t get paint on them. On the Alien head we had used computer cleaner to get the dripping effect we were looking for but in a finer point. Originally the head was green, but it was a bit cliché and the shoes needed more color, so then we tried a blue, but it was an extremely dark blue so that went in the opposite direction. Lastly we went with red and it was bright, bold, and perfect.
The intended message is that art, to a lot of people, sometimes feels like it requires so much work to make something so abstract and complex, when a simplistic is perfectly fine. 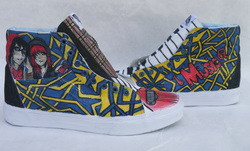 MUSIC - Beatriz & Brian, 11th & 10th grade
For the Vans Shoe Competition, my group chose the design to be based on a music theme.  We chose this theme because music inspires us in our everyday lives.  During our brainstorming, we decided that other than just including instruments, we apply musical vibes. We were planning on applying musical notes and jagged lines for effect, but we didn’t because we couldn’t properly organize those little details on the shoes. Instead, we applied thicker jagged lines in a manner that looks electric.
In order to create the design we did, we made a combination of two other ideas my partner and I had already planned out. At first, my partner made an art based template and I was basing my template on music. He created a collage of jagged arrows. I would describe it as rather simple and lacking, but an impressive design. What I drew was a sketch of a couple of teenagers listening to music through head phones, and on the other shoe, the word “music” written in bubble letters. My design was lacking as well. Then, we came to the agreement that combining the two designs would be an excellent idea.
The image we attempt to portray is the concept of self-expression and individuality through music. The most common form of self-expression is music and my partner and I intend to depict that message. Our shoe design shows this by displaying teens happy and listening to music. The shoe design is random and unpredictable, demonstrating originality. Overall, our design is supposed to display the free spirits and symbols of music. 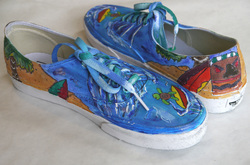 SPORTS - Tatiana, 10th grade
For the Vans Shoe Competition I chose to draw the design of a sport action. My design was base on surfing. I chose to draw this because most people think that an action sport is mostly baseball, basketball, or soccer. So I decide to draw something different that people wouldn’t think of. Something that I would like to do in some distance future and that involve the ocean. Then the idea of surfing popped in my head. But then I have to create something original form my imagination. So I had to think of what animal from the ocean would look right to be a surfer. I thought of a shark and a dolphin but it didn’t seem right so then a turtle. To make it more interesting I wanted my turtle to have a personality like Snoopy. So I decide to ad shades to my turtle surfer making it my own.
To create my design I had to come up on how I was going to lay it out. I stared to think of what can be related to surfing and what I need to ad. So I came up with a tiki and a surfer board on one side of the shoe and the other side of the shoe of a palm tree and a surfer board and three little coconuts on the side. I started to sketch with pencil my design on the shoe. It had the setting of a beach theme to it. Then I stared of creating the waves with the mix colors of three different shades of blue, green, and white trying to make somewhat a realistic ocean. After painting the other details of the shoe like the tiki and the sand. Once it was dry I started to sketch the turtle surfing. Once I was done I added color and for everything I drew with out line with black marker.
My message is that sports can be anything not just with a ball. A sport can be played with mostly any environment. It could be martial arts or go snowboarding in the mountains. But it is what your definition of sports could be portrayed as.